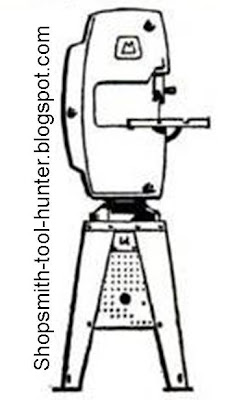 on't get so excited with eBay prices that you pay more than the price of a new tool! The current MSRP of the Shopsmith Bandsaw is $599.99. (As of March 2021)

FYI, The Shopsmith Bandsaw is one of the best band saws on the market! You can power it on your Shopsmith 10er, Mark I, Mark II, Mark V, Mark VII, and even with the Sawsmith Radial Arm Saw! It can also be powered by what Shopsmith calls an SPT Stand (Single Purpose Tool), the Power Station, or the Crafters Station.

There have been a few minor improvements made to the SS bandsaw over the years; with the best yet most subtle being the move from bushings to ball bearings in the back-up positions above and below the table and in the auto-track system. Prior to this, the SS bandsaw would have to be oiled regularly to prevent it from screaming like a thousand fingernails on a blackboard. This upgrade is offered by Shopsmith for all old bandsaws, so don’t let the lack of this feature scare you off; and if the saw has a serial # higher than 97932 your saw already has this feature.

Another change came in the late '80s when SS introduced an “improved” table. I put “improved” in quotes because the improvement caused about as many problems as it solved. I was at a Shopsmith Store Manager’s meeting at Pinehurst, NC when this new table was unveiled, and after the initial, oohs and ahs one of the guys in the room said “Hey, it doesn’t look like it will lift into the drill press mode without hitting the table”. “No, that can’t be!” said the proud product manager. So one of the guys unlocked the base and BANG!, the way-tube tie bar smacked the bottom of the table! The product manager’s face went beet-red and the crowd busted out laughing. Oh well. SS introduced a set of extremely off-set tubes for users who miss the ability to leave the bandsaw in place when lifting the unit into the drill press, and all was forgotten. (Till now! Sorry Tim!) 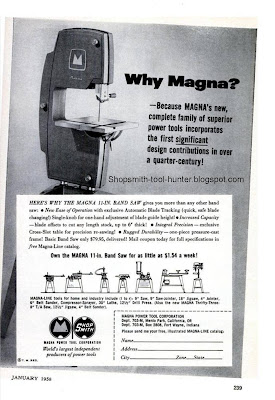 The old cast iron table was glass smooth and had two intersecting miter slots. One was used with the miter gauge for feeding wood into the blade in cross cuts. The other slot allowed for a miter gauge to be used as a fence. I loved this feature because it allowed you to adjust the fence quickly to compensate for inevitable drift; and once it was adjusted the fence could be moved closer to or further away from the blade without losing the drift setting. One negative part o the original table was the sacrificial aluminum table insert, which on many of the saws dropped a little too deeply into the table recess. They also would pop-out mid-cut and would get caught in the blade.

Side note: The ad shown at right was run in 1958 when Magna launched a complete line of stand-alone tools. The ad is purposely printed askew to stand-out in a magazine of same-looking ads. Worked for me! Click the pic to Biggie-Size it.

The new table was much larger than the original cast iron version, and for weight, reasons were now made from aluminum. After the introduction of the Mark V model 510 with its large ribbed tables, someone in product development decided that ribs were cool, so the new table featured ribs. Apparently, the same guy who forgot the check for way tube clearance didn’t stop to think that cuts on a BS aren’t always straight across the table like those made on a table saw, and the bad news was that the edge of your stock is constantly catching on the ribs as you make tight curves! After a few years SS made a change to the mold and filled-in a large circle around the removable insert. The new table has only one miter gauge, but it’s finally a T-slot that accommodates the 510 miter gauge bar, and it also has a neat patented feature that allows the user to tighten the slot if it wears over time.

Speaking of the insert; the new aluminum table has small screws under the insert that allows you to fine-tune the fit until the insert is dead-on level with the top of the table, and the insert also snaps into the recess with two retaining springs. Now the insert stays put when you tilt the table, and it doesn’t fly across the room whenever you remove the BS from your Mark V. This insert is a little tricky to remove and insert because it has two pop-rivets that have to be slid into place just-so, but once you get the hang of it, it becomes second nature.

Two more features of the new table are optional, but in my opinion, not really. One is a fence, which adjusts for drift and locks firmly into place. Originally it only locked on the rear of the table, but now it locks both front and rear. The other item is a neat little table extension that can also hold a silly circle cutter. Pass on the circle cutter if it’s an extra expense, but the little support is very handy.

A dust chute was added as an add-on and to install it you had to cut or drill a large hole in the cover and bolt the flange and elbow into place. After a few years, Shopsmith realized that this should be a standard feature, so they modified the mold and added an integrated port into the cover.

What started out as a user-suggest modification became a standard feature just a few years ago. Many of us drilled a small hole into the upper left-hand side of the cover so we could insert the 5/32” Allen wrench (AKA: the “Shopsmith Toolbox”) into the tension adjuster to lower the blade tension as we left the shop, without needing to remove the cover. Shopsmith was under pressure by Canadian law to change the way they attached the cover. They had to make it impossible to remove the cover without the use of a tool, so they removed the knobs and added more 5/32” hex-drive bolts. This made accessing the tension adjuster a total pain in the butt, so SS added the aforementioned access hole, and to make re-tensioning possible they also cut a window into the front so you can see the tension gauge. You can clearly see this little plastic window in the photo above; as well as the new cover-locking bolts and the built-in dust chute.

Speaking of the tension gauge: about once a year every woodworking magazine in America publishes an article by an author like Mark Duginski who walks the reader through a bandsaw tune-up and introduces concepts like co-plainer wheels and how to properly crown the tires on those wheels. The problem is none of these techniques are applicable to the Shopsmith Bandsaw! I highly recommend that you review the original patent for this saw (available through the link below), and you‘ll learn about how this saw is unique and I believe superior to all other bandsaw designs in this class of tools.  More on this in a separate post.

Click here for Shopsmith Bandsaws For Sale on eBay

Watch a Shopsmith Bandsaw being put to use in an unorthodox way by yours truly in the video below.


I told ya you could twist the blade on the Shopsmith Bandsaw!


Did you know you can slow your Shopsmith Bandsaw down for sawing plastics and metals?


In this video, I used the Shopsmith Bandsaw to resaw and to shape the table legs and cut the top round.