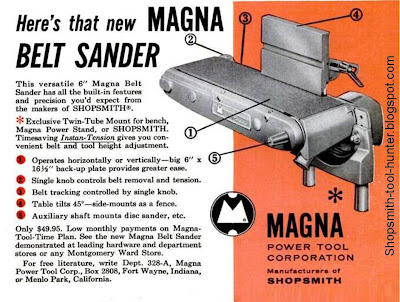 Don't get so excited with eBay prices that you pay more than the price of a new tool! The current MSRP of the Shopsmith 6" Belt Sander is $587.00. (As of March 2021)
FYI, The Shopsmith Beltsander is one of the best on the market! You can power it on your Shopsmith 10er, Mark I, Mark II, Mark V, Mark VII, and even with the Sawsmith Radial Arm Saw. It can also be powered by what Shopsmith calls an SPT Stand (Single Purpose Tool), the Power Station, or the Crafters Station.

I'm impressed at the genius of this design, which not only utilizes the same water-pump bearing Assembly that is used on the Mark V and Bandsaw, but it actually features two short sections of the same tube that we used for the waytube and bench tube on the Mark V! Because these two sections of the tube are hidden from view and are only 7" or so long they allowed Magna to make use of bent or scratched waytubes. Clever.

It has a thumbwheel for making quick adjustments in tracking and an auto-tension using that works like a charm. Watch out that you don't allow this to spring when the belt is off for changing, but even if you do this is easy to reset by following the instruction in the owner's manual.

There have been a few changes over the years to the SS Belt Sander:
Click here for Shopsmith 6" Belt Sanders For Sale on eBay