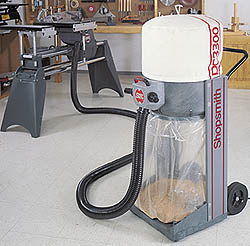 Don't get so excited with eBay prices that you pay more than the price of a new tool! The most recent MSRP of the Shopsmith DC3300 Dust Collector is $599.99, though it has now been replaced by the new and improved DC6000.


Most folks don't know that there have been two models of DC3300 Dust Collector sold by Shopsmith; The original was very successful but had two slight problems that SS was later able to address: The unit was loud due to a metal body and metal diverters inside that all the dust and wood chips impacted on their way to the bag. The second issue was the impeller was prone to breakage. You can bear this out by looking at the list of "Most Frequently Purchased Service Parts" on SS's web site. If you happen to have one of these older units and it begins to develop a Whump-Whump-Whump" roar, you should look into replacing the impeller. It's a quick install and the replacement part comes with excellent installation instructions. Anyway, the newer (current) version of the DC330 has a plastic body and can be easily identified by the relocation of the on-off switch from the back of the unit to the top of one of the legs. Either way, this is a great Dust Collector.
The DC3300 generated 330CFM of air movement, which the DC6000 promises 600CFM. Because it has yet to hit the streets I can only surmise that it accomplishes that feat by switching from the prior 1/2HP induction motor with a universal motor. I'll report back when I know more.