At Shopsmith's request I've been keeping tight-lipped about being part of the beta test group, but now that they have posted videos of it I think that opens the door for a few of my thoughts.

I was sent a PowerPro retrofit kit along with a 1954 Mark V headstock.  During its first year of production the Mark V headstock was what is called a sand casting, so I was curious how SS was going to be able to accommodate the wide range of tolerances that I know would exist.  Another fun prize was the fact that these early Mark V's didn't have an access hole under the rear name plate.  This has always made lubricating the control sheave a challenge, and simple tasks on the current headstock, like replacing the switch, require dropping the motor pan.

As the Shopsmith Youtube video shows the retrofitting precess starts with the removal of the headstock.  Even thought SS sent me a headstock I would still need to remove mine in order to conduct the tests following the retrofit.  I followed the instructions and because I also have a Lift-Assist installed on my machine, this too had to be partially removed.  Fortunately this is a very quick process, so my Lift-Assist and headstock were off in less than 10 minutes.

I had a few delays in the process as SS was completing the final draft of the instructions, so for several weeks prior to any machining of the head I had the retro components sitting on my bench just taunting me.  Mercifully the folks at Shopsmith contacted the Beta Testers with instructions on how we could safely play with the motor and the Control Pad in order to prepare ourselves for the tests to come.  This was a lot of jun, but let's fact it, it was like taking a kid to the candy store and telling him it was OK to play with the PEZ dispensers, but not letting him have any PEZ candy!

We finally got the instructions and again as the video shows there are a few templates and a drilling jig that make the machining on the new motor mounting holes a breeze.   It was then that I noticed two road blocks: A couple small parts were missing, not from my retro kit, but from the old headstock.  The other problem was a  bit of a surprise.  In order to install the large control unit inside the headstock the headstock lock must be removed.  No big deal really.  You just use a punch to drive out the little roll pin that connects the handle to the threaded rod.  the problem was that on this old unit the roll pin was driven into a blind hole.  Since SS was going to be sending be me the missing headstock parts I just followed the instruction for removing a damaged headstock lock and asked the folks at SS to send me a replacement lock.

A few days latter I received the missing parts and the new lock, so I was able to press on.  The drilling was straight forward, and all the drill bits and countersinks were included in the kit, along with templates and a neat drilling guide.

One little fiasco involved a step where I had to enlarge a hole in the motor pan for the relocation of the power cord.  I'll add this story as a separate post, because it's worth telling, but has more to do with me being a moron than anything else.

Now I was able to move on to installing the new parts, which included: A new two bearing quill, a new drive assembly that converted the old drive from the toothed Gilmer belt to the new Poly-V belt, a new switch and a new high-speed idler shaft.  I've done this conversion many time in my days repairing equipment at the Boston, Hillard and Dayton OH Shopsmith stores, and I knew that these upgrades alone would breath new life into this old tool. 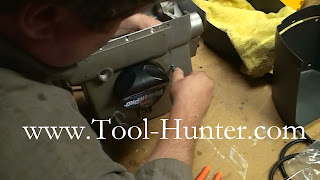 Next came the new territory.  The Control Pad installed so quickly that I had to read the instructions over three times to make sure I wasn't missing something.  Nope, it was installed with two screws in about 20 seconds!  From there things got a little tough for my fat and clumsy fingers; as there are several wires that need to be properly positioned and plugged-in, as you are balancing the control box just above these parts.  This was about the time that I started to miss the rear access hole.  I was confident that I have everything properly wired as I followed the instructions to use a zip-tie to tie back the ground wire and trim off the excess.

Next everything moves to the Mark V base.  The headstock is slid onto the way tubes, and the entire unit is raised into the drill press position.  From there the table is installed from the back side of the carriage, which is something that modern Mark V manuals show as a tip if you ever need to remove the motor pan.  Anyway, you use a 2x12x12 block as a platform to position the motor in just the right spot.  I hoisted the massive new motor onto the table and fortunately while it was still in my grasp I realized what happens if you skip the step that tells you to lock the drill press lock on the MKV base!   That sucker was about to drop backwards, taking the loose motor with it!  Whew!  Dodged that bullet.

The mounting plates on the motor lined right up with the holes that I drilled and countersunk in the headstock casting.  There are a few simple steps to positioning the motor and to wiring the motor to the control box and Control Pad.  It was then that I realized that I misread a step.  I was supposed to use a zip-tie to tie back the ground wire on the power cord and cut off the excess... OF THE ZIP-TIE, not the wire!

So after staring at the wire for a few moments I realized that I could trim a little more of the insulation from the wire and pull the ground wire out a few inches.  That did the trick and after all was in place and bolts were installed, I couldn't wait to turn her on.  All that was left to do was to turn her on and follow the tensioning instructions to tension the belts and I'd be ready to start the woodworking portion of the test!

The instructions said to turn on the main switch (the original mechanical switch) and that following a few clicks the pad would play a little tune and run through some warnings.  I flip the switch and.... CLICK THIS LINK 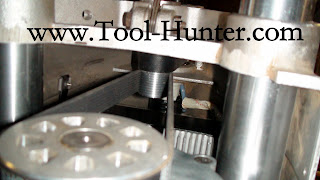 Dang it!  I checked the outlet, the plug, the wire, and then it hit me.  I took out my cell phone to use as a flashlight and I gazed into the depths of the headstock.  Past the motor, the control box, and there it was.  All my tugging on the wire while trying to expose more ground wire I had yanked the wires off the switch.  (Click the pic to biggie-size and to see the misplaced wire) Not a big deal.  All I need to do is pop of the rear name plate and DANG!

So, long story short (too late for that) I had to remove the motor, remove the headstock, drive the pin out of the headstock lock handle, remove the control box and plug the wires back on the switch.  What's really amazing is that this entire process of removing, disassemble, reassembly and installation took me a total of 15 minutes!  The learning curve is amazingly steep, so once I'd done it once it was somewhat second nature the second time.

That's about enough for this post.  I'll tell you how everything went from there in another post.  Scott