What's up with the Shopsmith Mark V shown on the new PowerPro video? New Mark VII? 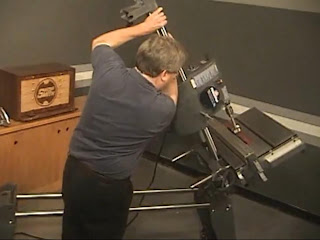 Some eagle-eyed viewers of the new Shopsmith PowerPro introduction video noticed something odd at the 47 second point:  http://www.youtube.com/watch?v=K8Pb_j8JdAM

Take a close look at the way tube tie bar at the top of the photo at right.  (Click to Biggie-size)

Another sleuth noticed something odd about the photo which is posted on the Shopsmith web site. (Below)  Notice anything different?  See the steel pivot pin in the right hand bench casting?  Yes, that's the pin that the Mark V pivots on when it's being lifted into the drill press position.  Now, notice the same pin in the left bench casting?  What's it for? 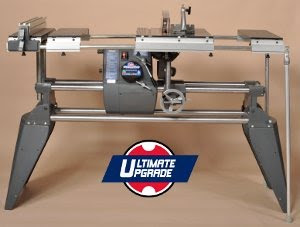 Some are theorizing that it's to allow the Mark V to tilt to the left like the old Mark VII, which would allow the headstock to be beneath the Mark V table.  Why?  For shaping and routing with the new PowerPro!   Others have pointed out that in order for this to work with the 505, 510, 520 table that the table tubes that pass through the carriage would have to have racks milled into them. 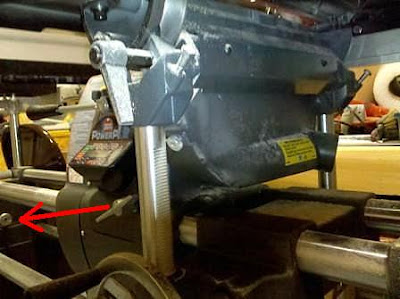 The Shopsmith.net forum is buzzing with speculation about a new Mark VII that Shopsmith may or may not be launching. There are a couple photos on http://www.shopsmith.com that show a Mark V with what looks like two of the pivoting base ends; which would imply that it can tilt both left and right. I've written a few of my thoughts on my blog and then today while we were in the shop during a rain storm the power went out. One thought that kept running through my mind was that the table would be awful high, so, this seemed like the perfect time to do some "cordless playing". My favorite son-in-law Nathan gave me a hand (sore, or perhaps just old shoulder) and we flipped the headstock over to simulate its position on the new mythical Shopsmith Mark VII.

Sure enough, even with the large rubber spacer removed from the way tubes from between the headstock and the carriage, the table still found itself around 46" from the floor. Now, granted, this is with the carriage in the current position, which isn’t exactly where it would be if the entire unit simply tilted left. For this to work the tubes that support the table would have to have racks milled into the opposite face. In that scenario the table would indeed be a bit lower.