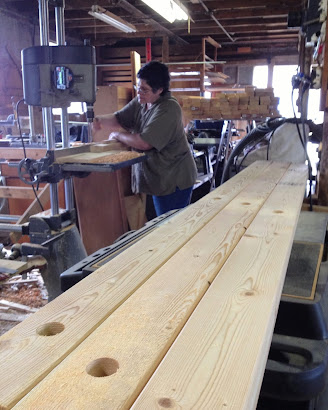 I recently stumbled across a pic from several years back of my sister "Lysol" in my shop working on one of my Shopsmith Mark V 510's that had the beta test 1950's "Greenie" headstock. As part of the beta test, I was asked to add the PowerPro upgrade to the old headstock, and while that process alone was interesting, once the retrofit was done I was instructed to "use it like I stole it" so that any issues would be uncovered prior to the product's public release.

The most interesting part of the retrofit was the fact that headstock casting of the very early Mark V's was sand-cast, so the walls were super-thick and varied somewhat in thickness from one spot to another.

I really have to hand it to the engineers at Shopsmith, who not only brought the Mark V into the 21st Century but also made sure that even the earliest Mark V's could come along in the evolution.