Should a Shopsmith user also own a Track Saw like the Festool, Makita, DeWalt, Mafell or even a clone? 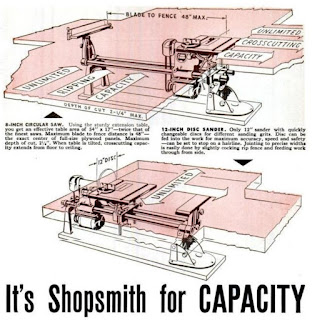 I've owned and used a Shopsmith Mark V since 1987 and over the years have developed a a pretty clear picture of what operations make sense to do with the Shopsmith and which are better handled by some other hand tool. What may not be intuitive at first is the fact that when cutting a large piece of  lumber or plywood, no matter how large your table saw is, it's often easer, more accurate and safer to take a portable saw to the wood rather than the wood to the saw.

Just think about the space you'd need in your shop (or driveway) to rip down the 8' length of a sheet of plywood.  That's 8" ahead of the blade, 8' behind the blade, and whatever space you'll need for yourself and likely a helper. That's somewhere around 20+ feet of clear space!

Now, think of that same cut being made with the wood in a stationary position with the saw gliding down its length. Get the picture?  It just makes sense to use a hand-held circular saw to rough cut our stock into reasonable sizes, and then we can move to the Shopsmith for joinery, if needed.

So have you tried to make accurate cuts with a Skill saw? Yeah, me too. Based on that experience I have been drawn to the European approach of a plunging circular saw that follows an extruded aluminum rail, that itself has a non-skid backing and can also be conveniently clamped in place with clamps that integrate below the track.  These plunge saws were originally brought to market in Germany in the 1980's by the company now known as Festool (formerly Festo), but now that the patents have expired and are now in the public domain similar tools have flooded the market. 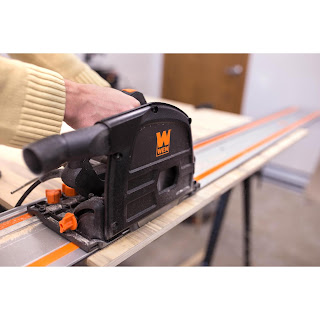 Whether they are called a "plunge saw" or a "track saw", the advantage of these saws over what our dads used is that not only are they guided laser-straight along the rail, but the edge of the rail features a sacrificial strip that supports the edge of the cut, right where the blade is exiting the cut and where otherwise we'd be looking at tear-out.

I've been playing with a Festool plunge saw at work for several years and finally have decided that in the coming weeks I'll be taking the plunge (#SeeWhatIDidThere?) and will add one to my shop. Which one? You may be surprised, but I've decided that I'm going to buy a WEN saw! WEN you ask? Yep. After much research I believe that for the amount of use most DIYer's are going to get from a track saw it's wise to stay below the $200 investment threshold, including the track.  I'm debating between these two models and may actually buy them both just to get a true comparison.  What do you think?

Keep watching the "My Growth Rings" Youtube channel for more.