Most folks don't know that there have been three models of 12" sold under the name "Shopsmith"; One was made to be powered by the Mark I, Mark V Model 500, 505, 510 and 520, and the Mark VII, and can be fitted to a SPT Stand. This tool was offered with a manual crank for feeding the lumber through the tool, but that option didn't last for long.  Later this unit was made available with a feed motor.  Next came the self-contained Free Standing unit with integrated Variable Speed known as the Pro
Finally came a private label Taiwanese 12" portable planer, which was essentially a knock-off of the successful Ryobi and Delta portable planers, and was remarkably similar to the first version of the Jet JWP-12.  These were sold during Shopsmith's "Woodworking Unlimited" phase in the early to mid 1990's. 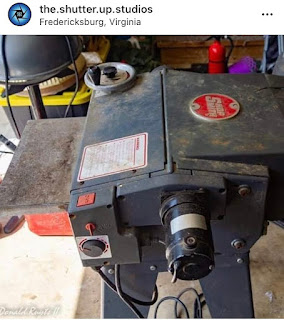 The photo at right was posted in Instagram by user @the.shutter.up.studios and shows a very early Mark V-mounted planer which has been converted to a stationary planer through the addition of the motorized stand upgrade. Note the table hight adjustment wheel, which was shortly replaced by a crank.


Planing on a Shopsmith Pro

Sadly the Shopsmith Pro planer is now out of production.
Among other things, the company who manufactured the variable speed drive motor, Von Weise, required a much higher volume commitment than what Shopsmith was able to maintain, so the two Shopsmith Planers have been retired.  I've heard from some folks who have purchased used SS planers and who have experienced breakage of the plastic drive gears, only to be told by the folks at Shopsmith that they had to purchase an entirely new motor.  This is the case.  You do have another option: contact Von Weise directly at their web site: http://www.vonweise.com They'll need some numbers off your motor to get you the correct gears, but they'll only set you back $6 or so.  In fact, you'll probably pay more in shipping than the cost of the gears. 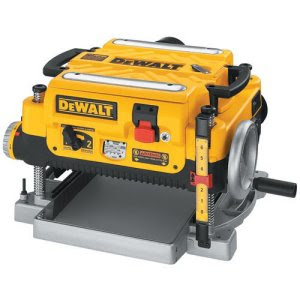 This is the first time I've done this on this blog, but I'm going to make a recommendation that if you can't find the SS at a reasonable price, or if it is out of reach of your wallet, that you consider the DeWalt 13" DW735 Heavy-Duty 13-Inch Portable . This is available for less than $900 (Under $600 for reconditioned) and has features that rival stationary planers in a semi-portable design. I'll blog a bit more about this, but for now, if you are in the market for an excellent at a great price, take a look at the DW735 at Tool King. Click the link below and search "DW735".