Why Magna? Shopsmith Jigsaw Ad from 1958 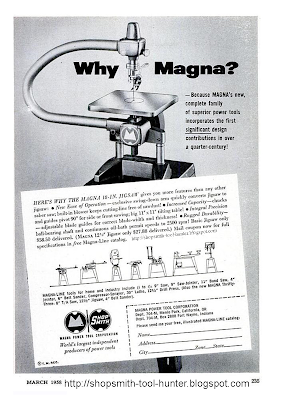 Now, this is a cool old ad! In the late 1950's Magna Power Tool Corporation was trying to reach out beyond the Shopsmith Mark V owners with an appeal to DIYers who preferred stand-alone tools. The Jigsaw shown in this ad, like the Magna/Shopsmith 4" Jointer, 6" Belt Sander, 11" Bandsaw and the Sprayer could be mounted on either the Mark II or Mark V, or as it was shown here it could be mounted on one of two motorized stands called SPT stands. (SPT = Single Purpose Tool)

This stand is no longer available in the current Shopsmith line, but the single SPT stand is still made.

If you click on the pic to Biggie-Size it, you'll be able to get a better look at the little silhouettes. Notice that among them is a lathe and a drill press. I have some info on these that I'll share soon, but in the meantime, if you happen to have one of these I'd love a picture of it.