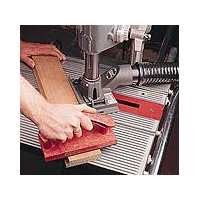 Don't get so excited with eBay prices that you pay more than the price of a new tool! The current MSRP of the Shopsmith Biscuit Joiner is $159.66. (as of Oct 2019)


The other unit was offered as the Universal Biscuit Joiner and was mounted to a laminated board which could them be clamped onto any make drill press. This version is no longer offered by SS.
At some point in the early 1990's a company called TotalShop had the Shopsmith Mark V model 500 knocked-off in Taiwan. US patent protection had expired long before, and besides SS being able to make a little trouble over trade-dress issues, there wasn't much SS could do about it. That is until they knocked-off the new Mark V-mounted Biscuit Joiner! I happened to be on TotalShop's mailing list and when I saw the illustration I about fell out of my chair! They not only copied the newly patented tool, but they lifted the illustration in their catalog straight from the Shopsmith Biscuit Joiner owners manual! Not only were they infringing on the patents, but they added copyright infringement to boot!


In exchange for my bringing this to the attention of SS's attorney (he was a woodworking student of mine.) I was given one of the offending units after TS was forced to halt their sales and surrender their inventory to SS! By the way, the knock-off is a piece of junk!

The Shopsmith Biscuit Joiner works great for edge to edge joints, but things get a little weird when the joint is in the middle of the face of a board. Watch the video below for more details.

Click here for Shopsmith Biscuit Joiners For Sale on eBay


Here's a video of the Shopsmith Biscuit Joiner being used on the face of a board.