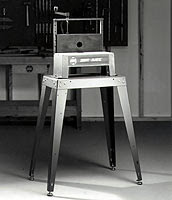 This tool was originally sold by the Strong Tool Design as the Strong Jointmatic Model 4200, and after Shopsmith purchased the rights to make it they took it into their R&D department and added dust collection and removed one lead-screw and the synchronizing bicycle chain. After a few years this tool was retired.

As a Shopsmith employee at the time I had been given a bit of a heads-up of Shopsmith's purchase of the Strong patents, and even got a hands-on demo of Mr. Strong's version of the tool by Donald himself.

Months later I was surprised by the final tool, because I had been hoping that we would be able to use the many "vertical" bits that were on the market for producing raised panel doors.  These bits normally required the wood panel to be passed across the bit on edge, which was quite precarious and potentially dangerous.  Anyway, I assumed that our R&D guys would do their best to permit the use of these bits on their version of the Joint-Matic, but when they dropped off a first run version to my shop I noted that the opening in the table was too small to accommodate these bits.  I called my contact in Product Management and invited them to the shop and showed him the problem.  He replied "Turn it on and crank it down into the table".  What the heck, why not?  So I did and the carbide tipped bit cut through the table like butter.  Next we ran a few panels over the bit, horizontally, mind you, and the panels came out perfect.

The second problem was discovered later while using a long spiral bit along with the miter gauge; The but cut right through the base of the miter gauge!  So, I went to work fabricating a sub-table which accomplished two things: 1.) It gave the Joint-Matic a longer table opening that would accommodate the longest bits I could find and 2.) I inserted one of Shopsmith's patented adjustable miter slot extrusions a few inches away from the platen, keeping the aluminum gauge away from the bit.  This sub-table was attached to the Joint-Matic's t-slot miter slot using a couple of Shopsmith's T-Nuts, and when it was all said and done I had created what became one of Shopsmith's top selling tool accessory.  I was later paid for this accessory table idea with a nice Powermatic 64 tablesaw.

There is one important thing that you need to keep an eye out for if you are shopping for the Shopsmith version of this tool. You'll want to make sure that the plastic platen (SS calls this part the "Slide") that moves the router up and down isn't cracked where the knob that adjusts the backlash out of the lead-thread, threads into the platen. If you are buying one online ask the seller to tighten the knob gently and snap a photo of this detail from above. If it's cracked, you'd better be very handy with epoxy or you would be advised to take a pass.


Click here for Shopsmith Joint-Matic/Jointmatic items for Sale (Very light activity)  In like-new condition expect to pay up to $350.  Add for additional accessories and discount substantially for a broken platen. 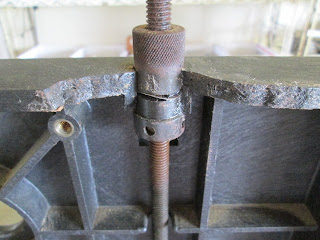 I just snagged this photo of a Jointmatic that happens to be for sale at this moment on eBay and that has an extreme example of the damage I mentioned above.  This is a responsible seller and at a $100 buy it now price, there's probably a way to restore this if you are clever.

Revised Sept 24 2014: I bought a new Joint-Matic! Well, it's new to me.  I've been watching for one on eBay and Craigslist for several years and when I find them they are either too expensive, to far away (crazy shipping expense) or the plastic platen (Slide) was broken, as mentioned above.  This one showed-up on Craigslist and after a short phone call to the seller showed promise I made arrangements to drop by and check it out.  The first thing I noticed as I entered his garage was leaning against the stand was a pristine sub-table accessory that I had invented while I was with Shopsmith.  It made me smile and I couldn't wait to load it and the Joint-Matic into my van.
Revised Aug 25, 2021: 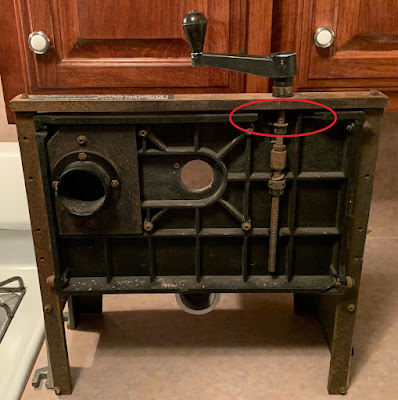 Every few months another Joint-Matic pops up for sale on eBay and upon close inspection close to half of them have a broken Slide! After playing with mine I think I've discovered two reasons why it breaks:
1.) The knob that locks the "Adjuster Nut" is overtightened. OR

2.) The Slide is lowered onto something that is left under it. This is much easier than you think, because there really isn't much storage room beneath the base, and things like the Bevel Gauge or a miter gauge that just seem like a perfect fit are ideal for causing damage. My advise is to double-side tape a block of wood under the base, ahead of the slide, to prevent yourself from inadvertently damaging the slide.
If this were my Joint-Matic I believe I would remove the slide and epoxy a block of hardwood into the broken space and then rebuild the broken part by drilling, taping and rasping something that resembles the original.  Good luck with that!