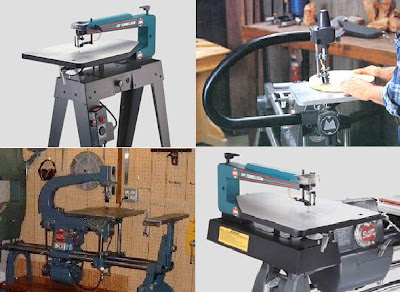 First off, don't get so excited with eBay prices that you pay more than the price of a new tool! The last known MSRP of the Shopsmith Mark V-Powered Scroll Saw was $897.99. The Shopsmith Free-Standing Scrollsaw was $897.99 in early 2008, but neither are currently in production.
Most folks don't know that there have been two models of Jig Saws sold under the name "Shopsmith"; One for the original 10er, and later one made to be powered by the Mark V and Sawsmith Radial Arm Saw. 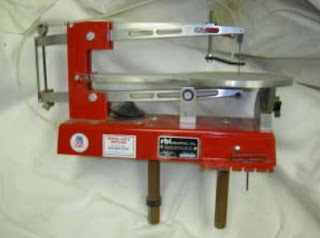 Likewise, there have been two Scroll Saws. (Three if you include the short-lived SS mounted Hawk from RBI, shown at right).

One scroll saw was made to be powered by the Mark I, Mark II, Mark V Model 500, 505, 510 and 520, as well as the Power Station, Crafters Station, and an STP Stand. The other is a self-contained Free-Standing unit with integrated Variable Speed. 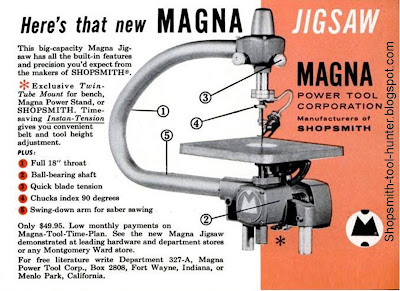 By the way, we utilized the motor and speed control from a Shopsmith Free-Standing Scroll Saw to power our famous Six Cheese Nacho Cheese Fountain which is shown on our blog: http://cheese-fountain.blogspot.com/

A few helpful links:
🟢 If you are looking for a good 3' X 5' Anti-Fatigue mat: https://amzn.to/2RZirJS 🟢 While the scroll saw isn't currently in production, they are available on eBay: https://ebay.us/JczluJ