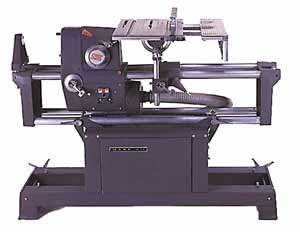 The Mark VII was Magna American's attempt to one-up the Mark V with the addition of an integrated shop vacuum and a below-the-table shaper option. (Actually, that's two up isn't it?) The bad news for Magna America is that Hans Goldschmidt was long gone and the engineers went a little wild in his absence.

They incorporated several new "space-age" plastics, which over time have been notorious for melting and cracking with use. One such part was a cam that is rotated by the user when they turn the speed dial up or down. This cam is in direct contact with a part that, when the tool is not properly lubricated by the user, seizes-up, and snaps or melts the cam. Sweet.

Another problem was a plastic rack which is incorporated on the inside of the front top waytube. This was a neat idea. You'll notice the crank in the middle left side of the headstock? When you flip-out the crank it engages the plastic rack, and you can move the headstock left and right. The carriage, which supports the table, links to the headstock, so where one goes the other follows. The bad news here is that this rack becomes brittle in cold weather, and when exposed to UV rays. 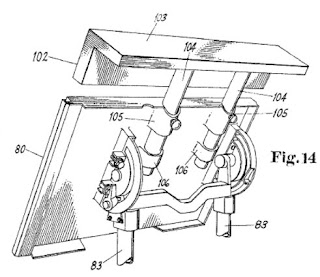 One neat innovation that sort-of lives on today in the Mark V 510 and 520 is the floating table. Unlike the Mark V of the 50's and 60's which had a single narrow extension table, the Mark VII extension table was wide and had two faces set at 90 degree angles to each other. It could be used on either end of the base, just like the Mark V, but it could also be mounted to the bottom of the main table, as seen in the photo above. (Click pic from US Patent for Mark VII) The beauty of this is that the extension table would go anywhere the main table would go, meaning if the table is tilted, the extension table tilted with it! This table was VERY tricky to align, as once you got it zeroed-in when it was attached to the main table, the adjustments you made to align it when mounted on the base frame would knock the previous adjustments out! I can feel my scalp hurting from pulling my hair out many years ago when I attempted this.

The main table featured a second saw blade slot, which was also found on the Mark V during this same period. In the end this was abandoned on the Mark V, because it left the narrow, extreme left edge of the table vulnerable to bending and flexing and saw guards were complicated enough without having to make them accommodate a second slot.

The miter gauge is ever so slightly different on the Mark VII in that the knurled knob was replaced by a V-shaped flip-cam. This miter gauge will fit any of the Shopsmith tools, except the 10er. The fence is also slightly different than the Mark V model 500. There's no knob for clamping, but rather it using a lever. I find this arrangement cumbersome, and tend to knock the fence out of alignment as I fumble with the lever. This is probably just me.

The base of the unit is also unique in that it allows the unit to tilt either to the left or the right. The advantage is your headstock can be under the table for drum sanding and shaping. Great idea, but this necessitates the need for a reversing switch, otherwise your cutters will run in reverse; so they developed a complicated switch which... wait for it... is prone to breaking!

The other problem with the base is that when the tool is tilted to the right for normal drill press us the headstock is just about mid-chest height, while the table is level with your crotch. Awesome! (See pics in the article below) This is because the tool pivots a foot or so further in on the bench tubes than the Mark V and the other 5-in-one Shospmith tools.

Lastly the base is part of a built-in dust collector. This was a great idea, and it was way ahead of it's time. The cabinet is for dust storage, while the impeller is mounted at the right base of the headstock. Here's where things went wrong. For the impeller to work it had to function equally well with the motor turning in forward or reverse. Now, I'll leave this to the Engineers to explain, but it's not easy for an impeller to suck when it's spinning in reverse, and this impeller is no exception. What this blower is good at doing is making a very loud noise and causing the motor to work harder than it needs to. For these reasons many Mark VII owners removed the blower.

While not a manual, the patent for the Mark VII is interesting and is available at www.patentplaceusa.com. Search "Shopsmith"

Click here for Shopsmith Mark V Replacement Headstock listings FYI: The Mark V headstock will fit on the Mark VII frame, but the plastic rack must be removed. Not a big loss, seeing that it's probably already broken! 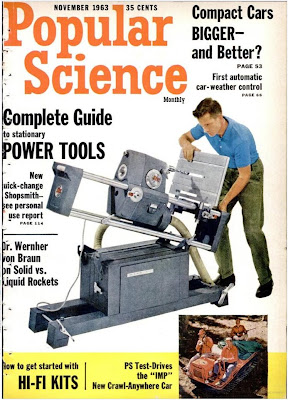 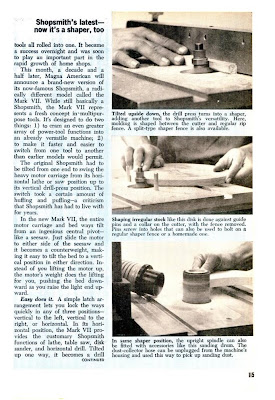 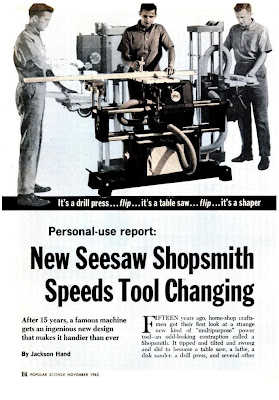 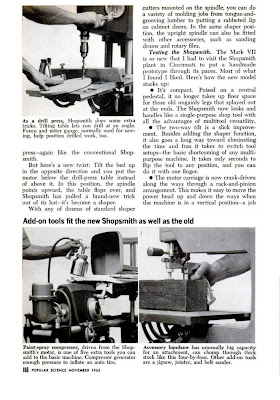 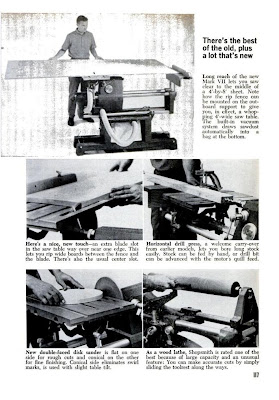 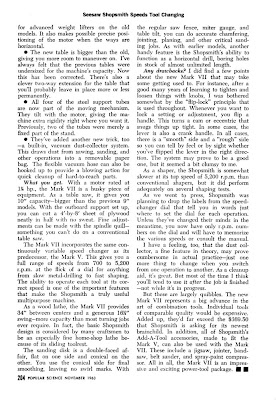