John Folkerth, Chairman and Founder of Shopsmith Inc. Passes Away 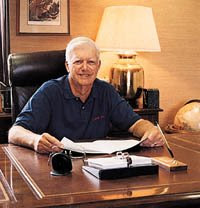 I received a report early this week that John Folkerth, the Chairman and Founder of Shopsmith Inc. passed away Friday Dec. 19th, 2008.

This information comes from a reliable source (which has now been double-confirmed) and from what I hear the folks at Shopsmith are keeping mum about the details for now. Keep in mind that Shopsmith is truly a close family of folks who are in mourning. Please do not inundate them with requests for details about his death or the funeral arrangements. There will be a memorial service next week; details of which will be announced shortly and I'll pass them on if I can. (Revised below)

I worked for Shopsmith for about ten years through the ‘80’s and ‘90’s and had the pleasure of sitting side by side with John in meetings, car rides and meals. He was a tall, athletic man who could impress, intimidate and challenge you to do greater things. I also had the pleasure of teaching two of his adult sons woodworking in classes at the Shopsmith Woodworking Academy in Dayton, Ohio. They all inherited their father’s height and laugh, both of which were HUGE! He will be missed and Shopsmith will not be the same without him.

P.S. My wife reminded me of a cute story that she remembered about John. We were dining at a very nice restaurant just north of Boston with John and the crew from the Shopsmith store in Chelmsford MA where I was the manager at the time. Our Son, Seth, was three years old and was sitting in a highchair near John as we all dug into a BBQ rib appetizer. After finishing gnawing on the tiny little bone Seth had BBQ sauce on his fingers and began waving his hands erratically about, expecting someone to clean them. John looked over at the Seth and said "Why don't you just lick them off?" Seth's eyes got big as he stared at his fingers and started to cry. We were trying to figure out what was wrong when Seth said something like "But I don't want them off!"

He thought John was suggesting that he remove his fingers with his tongue rather than clean them! With that John let-out one of his bombastic laughs that just shook the place!

That boy never was quite right after that and we owe it all to John Folkerth. God bless you John.

John Randolph Folkerth
News Death Notice FOLKERTH, John Randolph 75, left this life December 19th at the Villages Hospital in Florida. He was an awesome husband for 54 years to Carolyn Folkerth and lived most of his life in Dayton. Son of Harold and Peg Folkerth, John is survived by two brothers, Gene (Anne), who live in The Villages, Florida, and Bruce (Betty), who live in Naples, Florida. He leaves three sons, John (Karen), Bob (Robin), and Dave, and nine grandchildren: Brooke, Kate, Whitney, Bill, Laura, Lisa, Lindsay, Allison, and Edward, to whom he was devoted. John started Shopsmith, Inc. in 1971, and served as Chairman and CEO for over 30 years. He attended Oakwood Schools, graduated from Baylor School in Chattanooga, and attended Vanderbilt University and the University of Dayton. John was a life-long member of St. Paul's Episcopal Church in Oakwood. In recent years he pursued his interest in golf and was a member of the Moraine Country Club. While his enthusiasm for the game was only exceeded by his handicap, he persevered. His spirit and smile will be dearly missed by a host of friends and relatives. Services will be held at St. Paul's Episcopal Church on December 30th at 4:00 p.m. In lieu of flowers, contributions may be made to St. Paul's Episcopal Church, or the charity of your choice.
Published in the Dayton Daily News on 12/24/2008