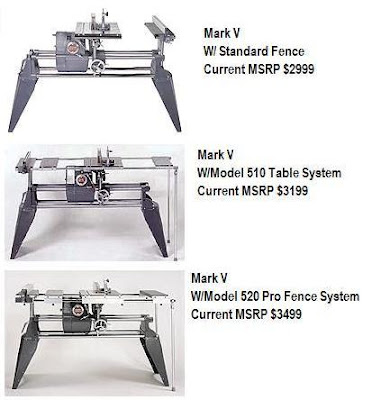 Don't get so excited with eBay prices that you pay more than the price of a new tool! See the photo at right for the current MSRP of the Shopsmith Mark V from http://www.shopsmith.com/.

So let’s talk about the Mark V.

When Hans Goldschmidt set-out to create his first multi-purpose tool in the last 1940’s he started with an analytical review of the features that power tools had in common. He noted that in most cases there is a spindle that spins, a support table for the wood and ideally a stand to support the wood at a comfortable position. From there he developed the concept of the first of the Shopsmith 5-in-1 tools the 10er. The 10er featured a movable spindle which in the tool world is known as a quill. This is a must-have feature for a drill press, but it’s unheard of on a table saw; so obviously the quill must be able to lock in place when a saw blade or other cutting tool is attached. An added benefit to having a saw blade on a quill is once the fence is in place, if a very fine adjustment is needed in ripping width, rather than moving the fence you simply move the blade! It’s very cool.

With the spindle being held horizontally for the saw function, and seeing that it’s a quill, why not use it for drilling horizontally? That’s not something the average home woodworker has available and it’s much more practical (also safer) than trying to balance a board on it’s edge on the drill press. In fact, with the exception of the jointer it’s always preferable to have a board resting firmly on one of its faces rather than on its edge, so horizontal boring is a excellent tool in the Shopsmith arsenal.

So Hans settled on the five tools that made the most sense to combine into one tool, knowing that it would still leave a few important tools off. He had an idea about how to remedy that, but those ideas would have to wait. After a few years of successful sales under his belt Hans went back to the drawing board to improve upon his original idea. That effort eventually led to the introduction of the Mark V (Model 500) in 1954.

The Mark V still featured the basic five tools which were present on the 10er; Table Saw, Lathe, Drill Press, Horizontal Boring Machine and a Disc Sander, but all of these functions were improved by the introduction of a unique and fully integrated variable speed control. While Magna did offer an optional speed changer for the 10er, it had exposed belts and was a bit hit and miss due to the lack of a speed indicator.

One of the best things Hans accomplished with the Mark V was he was able to integrate the novel “Add-a-Tool concept, which allowed the woodworker to add the other important tools that were not practical to integrate into the 5-in-1 tool itself, but were critical to certain woodworking tasks. These included a Bandsaw, a Jigsaw, a Jointer , a Belt Sander and an Air Compressor. When these tools were introduced they each set a new standard in the industry. In fact, I believe that the Shopsmith Bandsaw and Belt Sander are still heads and shoulders ahead of all the others in their class. Not too shabby for 50 year old designs!

The Mark V was substantially improved in the 1960’s with the introduction a more powerful motor (1 1/8hp) and an improved drive spindle on the quill. This was later augmented in the 1980’s by the addition of an additional bearing that helped stabilize the spindle during faceplate turning, sawing and drilling.

Also in the late 1980’s the Mark V got another MAJOR renovation with the introduction of the Mark V Model 510. This model is built upon the same base and headstock as the model 500, but everything else changed. The first issue was Shopsmith was determined to produce a saw guard that people would actually use. That meant that it had to be easy to install and remove; and it had to remain in alignment with the blade even if the blade is moved in the saw table slot due to fine tuning with the quill.

Shopsmith was also working on an updated version of the Shop Vacuum, which would later become the DC3300, so they knew that they would want to be able to capture not only sawdust, but also dust produced while using the disc sander, so one of the thing that would have to happen is the tubes that support the worktable would have to be spread further apart. Seeing that one of their goals was also to make a larger table, spreading these tubes would make a lot of sense . This new layout would necessitate a new carriage design, so while they were at it they resolved a little weird glitch in the Model 500 carriage design. To raid the table on the Model 500 you turn a handle counter-clockwise; where on the 510 you turn a large wheel clockwise. Much more intuitive, and the wheel was a very nice improvement.

A few more improvements that the 510 has over the 500:
The 510 has T-slot miter slots, a longer, taller fence with improved locking both front and read, a true riving knife, a much better table insert that continues off the back of the table, so there is no need to level the table inserts at the back, (If you own a 500 you know what I mean) and two "floating tables" which can be placed between the main table and the narrow support table, or even in front or behind the main table for supporting log rips.

In the late 1990’s Shopsmith further refined the Mark V with a new fence system that they mounted on the 510 table system. This tool was given the model #520. This fence in about twice as wide as the 510 fence, and even features two t-slot miter slots in the top and one on each face for the addition of fixtures, jigs, feather boards, etc. The extruded aluminum rails also allow the user to install a new direct-reading rip fence scale. These are two magnetic, stainless steel scales that attach to the fence rails for fast and repeatable rip adjustments. These must be adjustable because when the table is removed from the Mark V and later re-installed, it’s unlikely that the blade will end-up in the exact same position within the insert opening, so the fence in locked against the blade and the scale is simply re-set to zero.

In the end, if someone offered me my choice of any version of the Mark V, I believe I’d stick with the 510, though the 520 isn’t far behind. For me the fence rails are a bit too chunky on the 520, and the double-wide fence necessitates the use of the floating tables, which are just too many parts to have in play. But that’s just me.

Mike Young puts a Shopsmith Mark V Model 510 through "All The Right Moves".


Mike Young on the Shopsmith Mark V Model 510 as a Horizontal Boring Machine:


A neat video of the Shopsmith Mark V changing modes.


Here's a series of videos demonstrating the Shopsmith Mark V