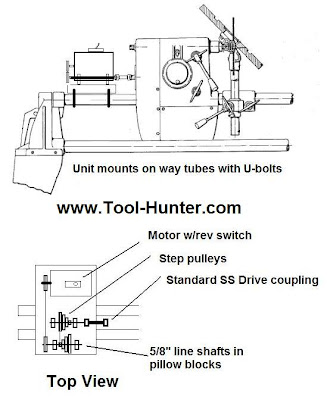 I was just asked by someone who found my blog if it was possible to reverse a Mark V. This is an excellent question and it's something that Shopsmith is working on and will soon offer in the form of the PowerPro headstock. (Wow, this is outdated! The PowerPro headstock was introduced in 2010) The current motor that is within the Mark V cannot be made to run in reverse, but that being said about 20 years ago I saw an idea that actually worked quite well. The owner of a Mark V found a reversing motor and mounted it on a heavy board which itself clamped on the way tubes behind the Mark V headstock. This device had a set of shafts, belts and step pulleys and coupled to the lower drive shaft on the headstock. When the unit was coupled to the headstock the speed dial on the Mark V was turned to high speed with the Mark V's motor off. This sounds like it would damage the unit, but damage is only done when lowering the speed with the motor off. What this did was create slack in the lower drive belt within the headstock, allowing the second motor to drive the unit without drag from the stock motor. This is tough to explain, so I've attached an elementary drawing which I hope makes sense. Click Pic to Biggie Size it.  Not only did this allow for bi-directional rotation, but with the pair of step pulleys the machine was able to spin at a much lower RPM that the standard low speed of 700 RPMs for a mechanical Mark V. Had that motor been variable speed, like those found on a treadmill, the design could be much simpler.