A New Electronic Variable Speed Shopsmith Mark V Headstock is in the Works!

(Read Updates at bottom)
Just days before the word got out that Shopsmith Inc. would be closing its doors and restructuring under the new name RLF Shop, the CEO of Shopsmith Inc set the following email announcing an exciting new improvement to the Mark V:

!! GENUINELY EXCITING NEWS !! -- FROM YOUR FRIENDS AT SHOPSMITH

I have some really FANTASTIC news for all Shopsmith MARK V Owners, as well as those who may have considered adding a MARK V to their home workshops.
Soon (late Summer of THIS year), Shopsmith will introduce an all-new, upgraded, computer-driven Headstock for the Shopsmith MARK V. Called the MARK V PowerPro®, here are a few of the features this new Headstock will provide:
In addition, you’ll enjoy a much broader speed range than with your current MARK V -- and change speeds with digital, keypad controls rather than a mechanical dial. And, since there will be fewer moving parts, there will be less maintenance than current machines.
This is truly a quantum-leap to the 21st Century Shopsmith MARK V you’ve been waiting for…and, of course, you’ll be able to upgrade your current Model MARK V with this new Headstock at a fraction of the cost of a complete new machine.
PLUS…as always, all of your current accessories will work with this new Headstock, without having to make any additional adjustments or changes.
So, watch for more information between now and the end of Summer and get ready to step up to the 21st Century Woodworking Wonder….the all-new, Shopsmith MARK V PowerPro® Headstock.
It’s been a long time coming…but you won’t have much longer to wait. I assure you, it will be well worth it !
Bob Folkerth
CEO, Shopsmith, Inc.

This is an exciting new development indeed, and my sources within RLF Shop tell me that the new headstock is still a go! Read more about the technology within the PowerPro here:

P.S. The photo above is from a US Patent for an earlier Mark V headstock revision that never saw the light of day. I got to play with this headstock and it was cool, but most of what it was trying to accomplish was to satisfy the safety regulations in Canada. This was accomplished in the "C" headstock with the moving of the toggle switch and making it a removable key.

Updated 1/20/10:
I just got word that the new headstock is still a go for 2010! It sounds like Shopsmith will introduce it with a trade-in option, This is a brilliant idea as the last thing they need is a flood of used Mark V headstocks on the used market. Below are a couple videos that explain the concept behind DVR drive motors, like the one that will power this exciting new headstock.

Update 1/31/10:
One interesting tidbit is that the motor within the new headstock, and perhaps even the entire headstock will be produced for Shopsmith in New Zealand. This just happens to be the home of Teknatool International; the very folks who own the patents on the DVR power system. Another interesting piece of intel is that Shopsmith received a shipment of "WOOD TURNING ACCESSORIES" which weighed 296kg (651lbs) from Teknatool in New Zealand in June 2006. Knowing full well the "Speed of Shopsmith innovation" this makes sense that SS would have purchased a lathe headstock or three to experiment with.
See the Teknatool to Shopsmith Bill of Lading here. Updated 2/3/10 REAL NEWS!
Earlier today Bob Folkerth announced on the Shopsmith Forum that the new PowerPro headstock is moving towards the launch pad! One of my guesses about the new technology was proven correct in that there will be an upgrade option, where we will be able to add whatever new components are necessary to convert our old MKV head into a new PP head. That means that it is NOT a complete new head that's going to replace our old one. SS will offer first an upgrade "kit", followed by complete new MKV's off the assembly line featuring the new headstock. This means that once again Shopsmith is putting their previous owners at the front of the line to get the new technology. Thanks for remember who brought you to the party.

I've been assured that those of you who are all thumbs, or who don't have the time to devote to the conversion process will be able to ship your headstocks back to the factory for a professional conversion; and perhaps there will even be a faster trade-in option. Imagine being able to make a purchase of a reconditioned and fully-upgraded headstock of the same vintage as your current one, and once you receive it you ship your old head back to SS in the headstock box as a "core exchange. Something like that would be very appealing.

I'm confident that if I can think of it SS has already thought of it, so now we just need to be patient and start squirreling away some PowerPro funds. I CAN'T WAIT!

Some things we can observe from the photo (click on it to Biggie Size it)
Here's the announcment from Bob Folkerth from Feb 3rd, 2010
EXCITING NEWS FROM YOUR FRIENDS AT SHOPSMITH

I have an update regarding some FANTASTIC news for all current Shopsmith MARK V Owners, as well as those of you who may have considered adding a MARK V to your home workshops.

A new, updated MARK V Headstock is coming soon!
As I announced several months ago, Shopsmith will soon be introducing an all-new, upgraded, computer-driven Headstock for the Shopsmith MARK V. Called the Shopsmith PowerPro, this Headstock will feature a number of new capabilities that Shopsmith MARK V Owners have been asking for. These include (but are not limited to) the following: More power, Broader speed range, Run in forward or reverse direction, Lowered electrical power requirements, Shopsmith product quality and warranty support, PLUS lots more (additional info to follow soon)

As always, this new Shopsmith product will be Spectacular
There have been some Forum comments regarding the delay of this introduction... and that's why I feel that I need to explain.

First and foremost, Shopsmith's policy has always been to deliver ONLY top-quality products. Shopsmith Tool owners already know this. Many of you own 30, 40 or even 50+ year-old machines that are still delivering great woodworking results, often with ZERO parts failures.

With Quality as our watchword, we've tested and re-tested the PowerPro under stringent standards that even the highest-end competitive machines would have trouble passing... and put it through multiple rounds of revisions and upgrades over the past year or so to ensure that it's the absolute best product we can produce!

During this developmental phase, some new technologies have been introduced that we've been able to incorporate into the PowerPro. Their discovery and eventual incorporation into this new product have also caused some added delays along the way... but you can take my word that although the delays have been longer than we would have liked, the results will be well worth your wait.

You will be able to upgrade your current MARK V to this new technology
The PowerPro is truly a quantum-leap into the 21st century Shopsmith MARK V that you've been waiting for... and, of course, as always, you'll be able to upgrade your current Model MARK V with this new technology at a fraction of the cost of a complete new machine. Our initial offering will be for these Headstock Upgrades, followed by complete, new Shopsmith PowerPro Machines, 30 to 90 days later. PLUS... as always, all of your current accessories will work with the PowerPro Headstock, without having to make any additional adjustments or changes.

Here's what our MARK V Owners have been asking for
So, watch for our announcement and get ready to step up to the 21st Century Woodworking Wonder... the all-new, Shopsmith PowerPro Headstock. It's been a long time coming... but you won't have much longer to wait. I assure you, it will be well worth it!

Here's a great picture of the PowerPro Control Panel 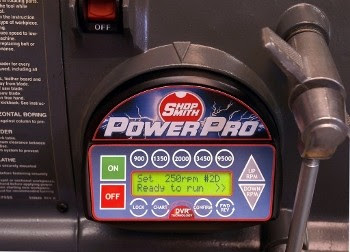