I just found a couple old photos of me with my Mark V, and now I'm feeling very old 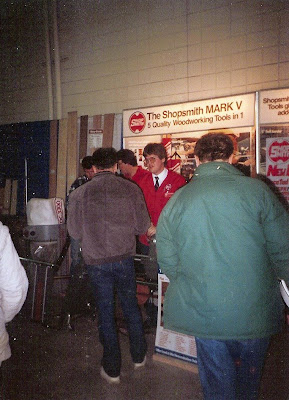 At the time this photo was taken I was the store manager of the Shopsmith "Boston" store in Chelmsford. Now, if you are from Boston you and I both know that Chelmsford is NOT Boston, but try telling that to a bunch of marketing guys back in Ohio!

I remember this show very well, because on the same weekend that this home show was taking place in Woburn we had a woodworking show going on in Wooster, and a turning class going on back at the store. Somehow the class got over-booked, so every Mark V in the store had to be used for the class (see lower photo of the actual class in action). That meant we were short a Mark V for the home show, so I pulled my personal Shopsmith from my shop and here it was.

The booth at the woodworking show didn't even have a Mark V, which was actually quite successful. We brought in every freestanding tool we had in the store, including an awesome European work bench, the DC3300 dust collector, the Pro Planer, the Freestanding Scroll Saw and the Router System. Oddly enough, we actually sold two Mark V's at the woodworking show without even showing it.

This was way back in 1988 and the fellow behind me to my left was my assistant manager and buddy Matt. Matt still lives in New Hampshire and to this day still works in a Rockler store, and though like me he still has his hair, it isn't this color anymore! 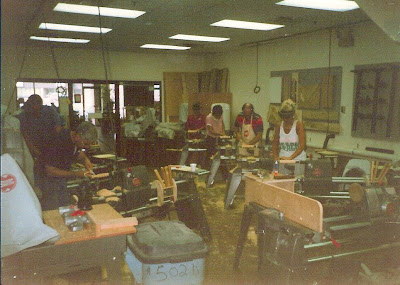 During this period my store was the only Shopsmith store to be open 7 days a week, and we also were the only store to have two full-time instructors; Bill and Norm.

Turing was Norm's passion (and I just confirmed, still is!), and as you can see this became contagious during our years there.

This photo also shows one of the few weaknesses of the Mark V, that being that the lathe spindle is a bit low as lathes go. To accommodate taller students we had some 6" riser blocks for the Mark V, which during a 3 day class really made the difference.