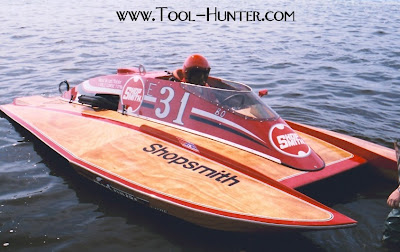 The October 1985 issue of Hand-On Magazine had an interesting article about two Dayton-based hydroplane racers who needed a better boat, so they did what any other Shopsmith Mark V owners would do. They made one. They secluded themselves in the shop for 2 1/2 months, and when they emerged they had a boat that was not only made on Shopsmith tools, but one that Shopsmith Inc. loved so much they sponsored it.

The Shopsmith Hydroplane was made by Alan "Bo" Schide and Ron Bruner, and with Bo at the helm their boat took the USA National Championship E-Class in 1987 and 1988!

Shopsmith had some awesome photos taken of the Shopsmith Hydroplane and all of the Shopsmith stores at the time had two photos of her. One of these photos is shown in the Hands-On article with the boat on a trailer with Bo and Ron next to her. The other, which I'd love to have, showed her flying straight up through a cloud. Sweet! 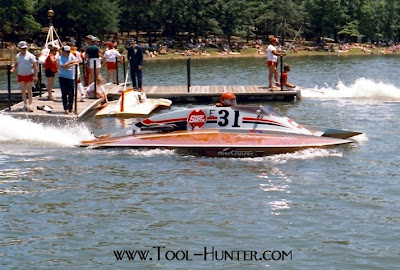 The bottom photo is of the original paint scheme, while the photo above is of the second. After a few years on the road and water she was thoroughly painted and ultimately sold and renamed.

The photos show here are courtesy of Gary Todd, from his Vintage Hydroplane web site