See, it pays to shop at the Habitat for Humanity Restore

Every other weekend or so I drop by the local Habitat for Humanity Restore to see the latest stuff.  This weekend I was hoping that they'd still have a RTA (Ready To Assemble) cabinets that they had on my last visit.  As I make my way past the front counter I noticed that just to my left they had a Shopsmith Mark V model 510 on display with a large price tag.  I was almost past it when I noticed it, so I turned to get a better look at it as I continued to walk by.  I could see that it was one of the first generation of the 510 because it had holes in the table tubes which is how Shopsmith originally bolted the tubes to the table.  (See second pic) I also finally saw the sign that indicated that it was priced only $275!  I though "Wow, someone's gonna get a good deal!"

As I rounded the corner I noticed something that stopped me in my tracks. It was a shopping cart parked next to the Mark V that contained a Shopsmith bandsaw.  The table was cast iron, so it was probably purchased with the Mark V in the mid to late 1980's.  Just behind the bandsaw in the shopping cart and standing uptight was a Shopsmith 4" Jointer.  Now I had to know what all was included in this sale, and if these items were priced separately.  I looked around the outside of the cart and found another $275 sign.  Is that just a coincidence, or are they trying to say that it's included with the Mark V? 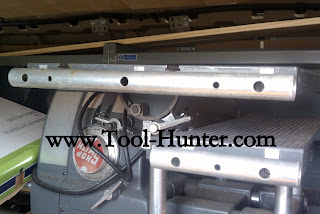 The cart also contained push blocks and what looked like most of the Mark V's accessories, and as I looked-up to take a better look at the Mark V I finally notices the SECOND SHOPPING CART!  This cart also had a $275 sign.  I looked over at the check-out counter and saw that despite a line of a half-dozen customers ahead of me, the cashier was just wrapping-up with a customer, so I made eye contact with her and while pointing at the tools asked "Is that $275 for each, or for all?  She replied "It's for all", and I said "I'LL TAKE IT!

I still had to check on the cabinet that I was there for, and after anxiously loading one onto a flat-bed cart I made my way back to check-out and paid for my new Mark V!

There were a couple HFH workers on the loading dock, and their supervisor had them each grab a load and bring to to the back of my van so I could load it.  They were amazed that I was able to load the Mark V by myself, and I explained the little trick that I learned while working for Shopsmith about moving the headstock to the low end while lifting one end of the MKV, and then sliding the headstock up the waytubes and then lifting the other end.

The guys then brought the shopping carts out and a large Rubbermaid tub.  I hadn't noticed it before, but without questioning it I popped the lid to make sure that it was Shopsmith related.  Inside was a stack of new, boxed bandsaw blades, the Mark V's owners manual and several other things.  Yep, they belong together, so I tossed it into the front seat and returned to load the rest of the stuff. 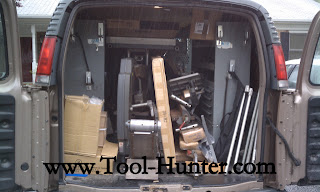 The first cart contained the bandsaw and jointer and to my surprise an early Shopsmith lathe duplicator!

The second cart contained a few surprises too.  It had a SS jigsaw and better yet a SS 6" belt sander!  The pic shows my van with everything including the cabinet jammed into my van. (Click the pic to Biggie Size It.)

Everything needs some TLC, and I'm thinking about shooting some video as I clean her up and do a few repairs and upgrades.

Finally, let me encourage you to drop by your local Habitat for Humanity Restore or Goodwill or Salvation Army store and leave some of your money.  I used to think that these stores were for folks who were down on their luck; but after working on a few HFH bulids and with a couple Christmas toy builds with St Vincent DePaul, I learned that these stores employ some sweet and hard-working folks who may otherwise be considered unemployable, and the cash that they make from the sales help them do the good works that they do.