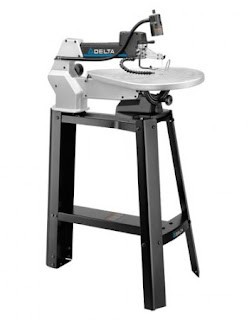 Yes, I know that this is a Shopsmith blog, but there are a couple non-Shopsmith tools that I absolutely love, and included in that list has been the DeWalt 20" DW788 scroll saw.

The following is excerpted from my Delta-Rockwell-Tool-Hunter.blogspot.com blog:

If you’ve been paying attention you may have noticed that Delta has recently introduced two new scroll saws (the 40-690 & the new 40-692) that are dead-ringers for the popular and dare I say excellent DW788.  Stanley, who owns Black and Decker, who owns DeWalt has sold or licensed this saw to Delta Power Equipment Company, as the Delta name is far more synonymous with stationary power tools, while for most folks the DeWalt name means portable tools.

One exciting advantage of this new Delta saw is that it now comes with a 5 year warranty!  Anyway, as I’ve stated before, we LOVE our DW788, and as a Delta tool you can’t go wrong.

UPDATE: Well, that didn't take long at all!  These saws are all sold out, and now Delta is introducing an upgraded version.  I guess that explains the blow-out price, huh?  Anyway, the new model is the 40-695, and it will be available in March 2012.  Here's a preview pic, which you can click on to Biggie-Size.

Link to Delta Scroll Saws for sale at Amazon.