Bought another Shopsmith Mark V and lost some hair. 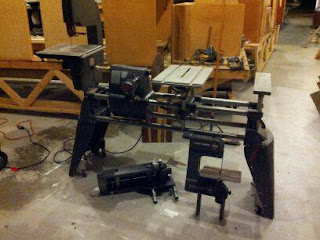 I noticed a Craigslist ad the other night that listed a Mark V (model 500) along with a bandsaw, belt sander and strip sander.  The ad listed them all for $500, and seeing that I've been bidding unsuccessfully on a dozen or so SS strip sanders recently, it made sense to pick this up and sell off the tools I don't need.

After making arrangements to inspect the tools, and also confirming that the owner was flexable on his price, my bride and I took the 100 mile trek from High Point NC over to Zebulon (Raleigh).

The owner turned-out to be a nice fellow, and to be fair he inherited the tools and admitted that he didn't know much about them.  I smiled as he then proceeded to tell me everything about it, as if he had been a long-time Shopsmith demonstrator.  Since he seemed to be having a good time I decided not to interrupt and tell him that I was quite familiar with the tool; and I lived to regret that decision.

He showed me a moulder head and said "It comes with a shaper cutter".  He picked-up the table from the beltsander and said "This is a tool rest for the strip sander".  This was all harmless, but then he plugged-in the Mark V and started to crank-up the speed dial.  The problem was he had a sanding disc mounted on the quill and the belt sander (sans belt, thank goodness) coupled to the outboard side.  As the speed passed "Magna Dado" the center of the rubber sleeve on the drive drum of the belt sander started to swell due to centrifugal force, and suddenly it impacted the plastic dust chute and all of a sudden "BANG"!  The dust chute flew one direction as pieces of the rubber sleeve flew right into my chest!  Thank goodness the chute followed a different path, because that sucker would have left a mark! 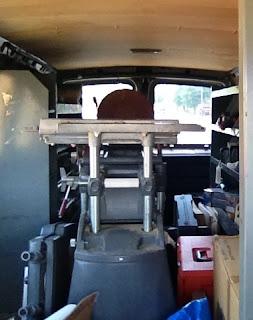 Anyway, the seller felt bad enough about his error that I pulled away from his place with a bunch of extra parts and only $340 lighter.  It's six hours later and I've already ordered the replacement parts from Shopsmith.com and once I give everything the once-over, the redundant parts will be making their way to eBay.