Ever Wonder What's Happening Inside Your Shopsmith Mark V? 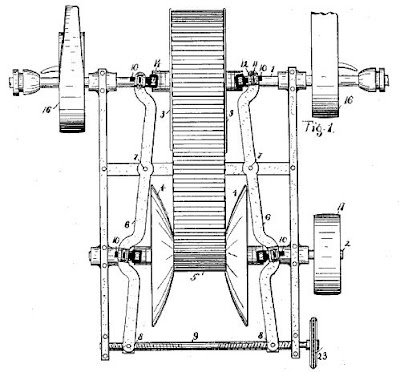 The Shopsmith Mark V is a marvel of engineering. The speed control itself is utilizes what is known as a "Reeves Drive", which is a pair of variable pulleys which at the turn of a dial become either large or smaller. Milton Reeves received a patent for this style of pulley in 1897 (Image right from US Patent). This is the same variable transmission method used on snowmobiles (or is that snow machines?) and several small cars like the old Subaru Justy.

Side note: This set of pulleys is mounted on a stainless steel shaft (called the Idler Shaft) that is actually an automotive water pump bearing assembly! This same part is machined differently for use on the Shopsmith Bandsaw, the old Jigsaw, and several other tools.

The other half of this pulley is called the Control Sheave, and it is moved in and out on the Idler Shaft with the turn of the Speed Control Dial on the front of the Mark V.

This pulley assembly is driven by the lower pulley assembly which is mounted on a stainless steel shaft of the motor. (If you ever wondered why the Mark V is so expensive, it's because of the many fine details such as this.) This lower drive pulley assembly is made-up of two sheaves; one called the Fan Sheave, which is fixed to the motor shaft and in addition to driving the v-belt it moves the air around the inside of the motor pan. The other end of this shaft has the Floating Sheave, which moves in and out in response to the adjustments made in the pulley assembly above. If the upper pulley is opened (which in essence makes the belt drop deep into the pulley as if the pulley was smaller) the lower pulley sill snap shut, becoming in essence a large pulley. This explains why it is easier to increase the speed on your Mark V than it is to lower the speed. When you raise the speed you are opening the upper pulley and the lower pulley is closing under spring power. When you lower the speed you and pinching the belt in the upper pulley as you close it, while simultaneously wedging the lower pulley apart with the belt. This also explains why you can turn the Mark V speed dial faster with the Mark V off, but it is impossible to lower the speed with the machine off. You shouldn't do this either way, but if you do raise the speed with the tool off nothing will be damaged. 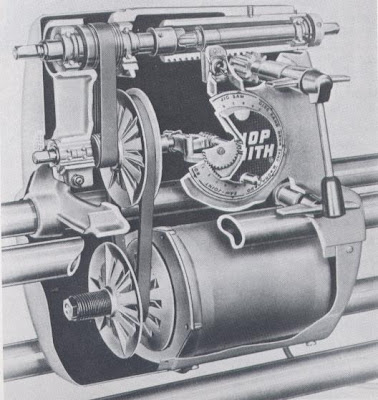 The Image of the Mark V is from 1962 when the motor was upgraded from 3/4HP to 1 1/8HP. You can tell this from the upper drive belt which is known as a Poly-V Belt on these more powerful units. Prior to the Poly-V the upper belt was a toothed belt known as a Gilmer belt which I mentioned above. The Gilmer belt had a problem which was also its advantage; It doesn't slip. No, really, it can't. The problem with this is woodworking power tools need something to slip, should the blade come to a sudden stop. The original Mark V had a special clutch that was inside the Drive Sleeve Assembly, but this was made of a clutch that was destroyed when the clutch is needed, which resulted in costly and time consuming repairs. When the larger motor was introduced Magna saw the need to change this drive to eliminate this weakness, so the clutch was swapped for the Pully-V belt, which not only has spectacular drive power, but can also slip if need be.

I've spent hundreds of hours with my hands inside these beauties and I have to say that they never cease to amaze me.

Here's a link to a pdf document that covers the replacement of the Gilmer and Poly-V belt on the Mark V.