Step right up and take a close look at the Ringmaster! It walks, it talks, it crawls on it's belly like a reptile!

Seriously, the Ringmaster is a tool that allows you to make deep bowls from 3/4" thick lumber, and with minimal waste. It does all this by guiding a set of HSS cutters into a spinning disc of wood, as shown at right. The manufacture of the Ringmaster made this tool with it's own motor, but wisely observed that their tool could be adapted to work on standard lathes, including a version for the Mark V. 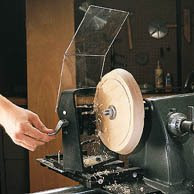 Now for some brutal honesty. How many clay pot-shaped bowls with plugged holes in their bottom can you stand having around the house? That was my opinion until I received the Christmas 1986 issue of Hands On Magazine, which featured a how-to article which covered the cool Native American inspired vessel shown below. This same issue had a great article called "Shop Report" that covered in great detail the use of the Ringmaster. This article inspired me to think of the Ringmaster with new eyes, and after some experimentation I started cranking out bowls and other projects that I was really proud of.

A couple observations I learned along the way included: 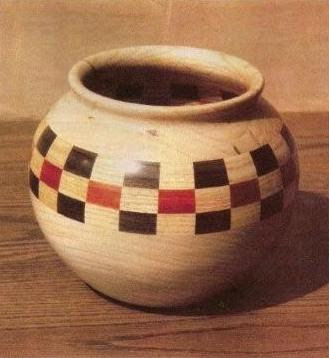 Click this link to see Ringmaster Tools for sale on eBay