In the late 1980's the Shopsmith Bandsaw received an upgraded table that brought several new features to the party:
The reason for this post is to point-out that the first version of the fence, shown in the left photo, did not have a rear clamp, as show in the revised version of the fence in the left photo. Additionally you can note that at some point following the introduction the fence was given through-holes to accommodate user-build accessory fences. This fence is made from the same aluminum extrusion used to produce the 510 fence.

Who we are looking at the pics you may also note subtle differences between the saws, including the removal of the cover knobs, a window to view the tension scale and added warning stickers on the upper guard. 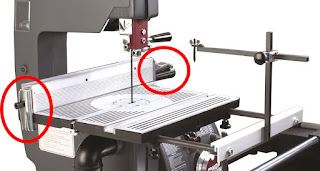 I've circled the two parts that are the most obvious additions to the fence. BTW, the term "Rear clamp" is probably a misnomer, because this fence is mounted backward on the bandsaw from it's normal configuration on the Mark V.

There are several post about this saw elsewhere on this blog, so feel free to use the search box above for more details.