Shopsmith Steady Rest and a story about why I built my own. 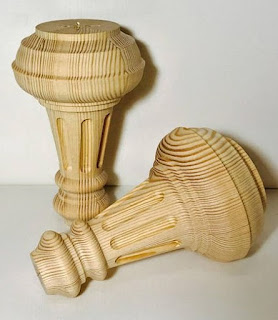 Back in the mid 90’s I did repair work for a couple antique stores in the Dayton and Waynesville, Ohio area. I was getting out of clock repair but due to some of these same shops knowing about my woodworking skills they continued to call be when they had particularly challenges issues. One such challenge was a shop that purchased a couple highboy cabinets that had sat in a couple inches of water in a flooded basement until the bottom of the feet (similar to those in the photo only slightly taller) began to mold and rot. My challenge was to mount those legs on my Shopsmith Mark V and support them without the use of a tailstock. I had to remove the rotten portion, drill a recess and turn a replacement part with an integrated tenon (think dowel) that would be glued into the original leg before final shaping and finishing. I couldn’t grip the leg with a chuck without damaging the pristine parts so I used Satellite City “Hot Stuff” CA glue to mount them to a scrap block screwed to a faceplate.  That allowed me to drive the work on the lathe, but now I needed a steady rest to support the balance of the weight and to make sure that if the glue failed that I wouldn’t lose all my hard work. 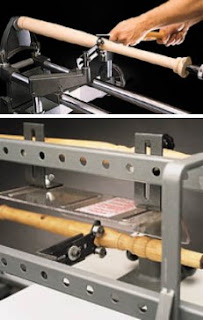 At the time Shopsmith made two steady rests, shown at right. One for spindle turning that mounted in the carriage, opposite of the tool rest, and the other mounted on the lathe duplicator. The problem with those designs was that they were made to eliminate whipping in thin spindles, but they didn't capture the project.

That lead me to construct the steady rest you see here. It is made from layers of Baltic Birch plywood, three Shopsmith “T-Nuts”, Art. #514491, and a couple short pieces of Art. #518074 T-Slot Channel miter track extrusions. Additionally I used three rollerblade wheels and mounted it to the Mark V way tubes using the clamp from a Lathe Duplicator. (Art. #51335601 Lathe Duplicator Clamp, Art. # 513743 handle) 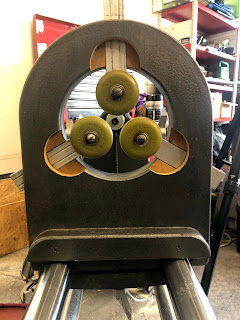 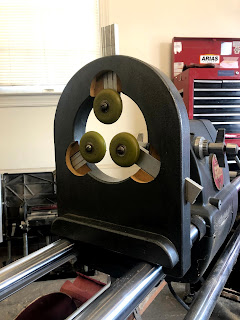 Eventually I need to shoot a video of this, but for now you have more info than I did when I built it!
I finally got around to shooting a couple videos: